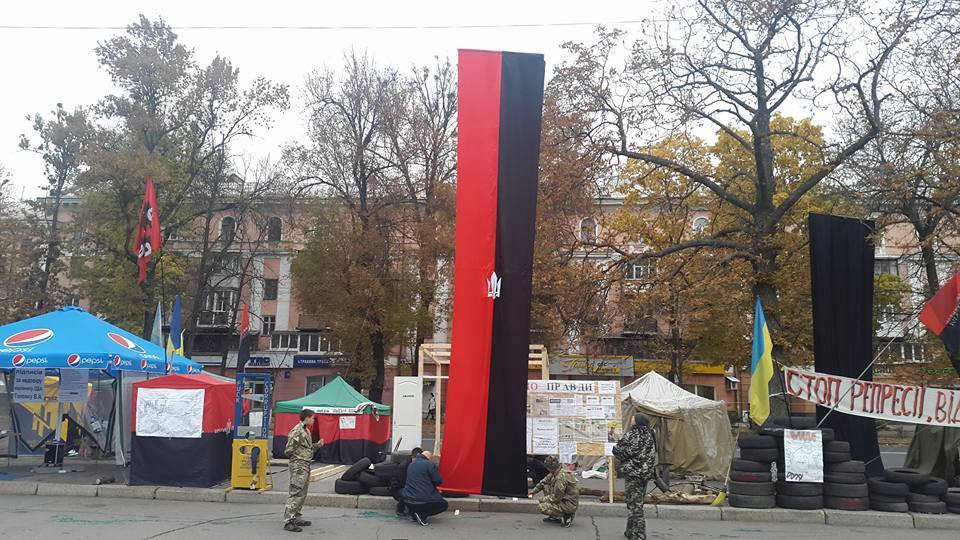 In the city of Poltava in front of the Poltava Regional State Administration for quite a long time there is a camp. Today we met with the head of the Poltava branch of NLM "the Right Sector" Chaus Mark Anatolievych.

Hello, Mark, tell me please, for how long your action has been going on?

Today is the 47th day

Tell us how it all began and whose idea was your "Maidan of Resistance"?

In general, the idea belongs to all members of the nationalist organizations of Poltava region. But the initiator, nevertheless, was the Right Sector. We had a congress of the right-wing forces, where it was offered to the “Right Sector” to organize the "Maidan of Resistance." What had led to this idea? After multiple arrests of patriots of different nationalist organizations, we realized that this is genocide of nationalists, in fact, total destruction of them. The Ukrainian Nationalists were charged with crimes they had not done. All citizens of Ukraine are well aware that the current government regime eliminates "undesirable" bright individuals who were in the forefront on the Maidan and in the area of ATO. As you know, a revolution is conceived by romantics, but villains take advantage of it. Therefore, Poltava patriots could not tolerate these authorities anymore and after the congress of the Right Forces of Poltava Region a unanimous decision was made to go out into the street. 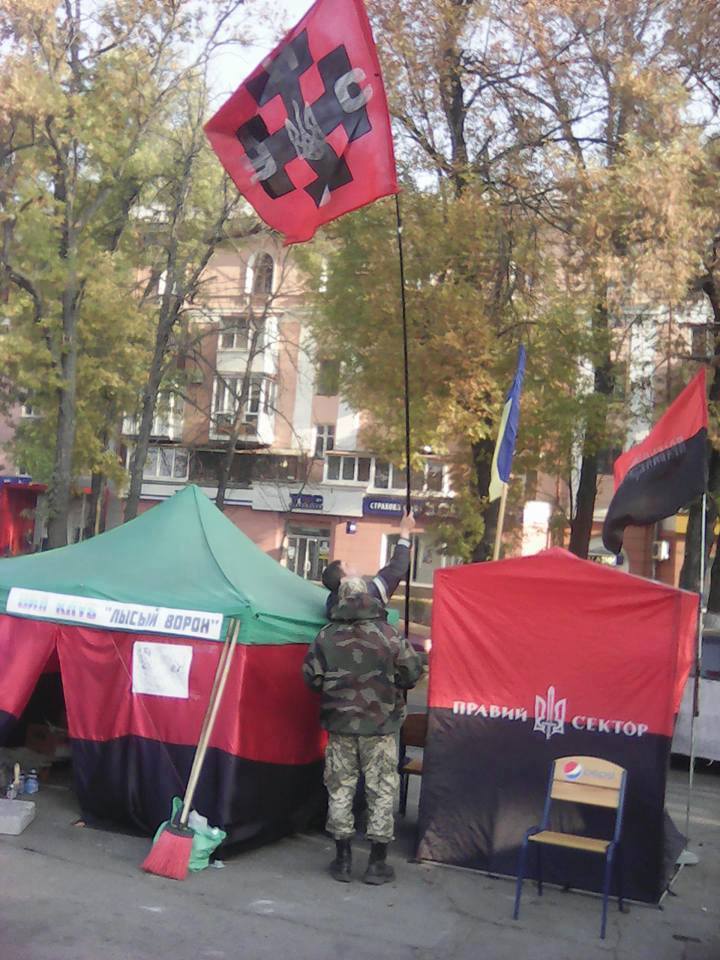 Which nationalist organizations are involved?

The Right Sector of Poltava region has proposed this idea and “Azov”, KUN, "Autonomous Nationalists", many public organizations: "The Last Bastion", "Civic Maidan of Poltava" have supported it.

What are the basic requirements and slogans of the "Maidan of Resistance"?

1. Release patriots from prisons
2. Stop political persecution.
3. Dismiss the Government for:
* persecution of patriots;
* Not-recognition of volunteer movement;
* not investigation of crimes during Maidan;
* failure to do lustration;
* lobbying interests of oligarchic clans;
* fund opacity of the Government and its representatives in the regions;
* food and communal genocide of the Ukrainian people
* lack of economic growth due to corruption;
* not breaking up with the corruption, but heading it;
* non-transparent gas price for Ukrainian production.

You say that today is the 47th day of the action. How do the ordinary citizens of this city react to it?

The reaction varies. Some people say that they are tired of “maidans”. Some irritated ones ask whether the 2014 Maidan was even necessary ... But most people, who are seeing the impoverished nation, tariff genocide, and the difficult economic situation, say: "Well done! We rely on you!" We, in turn, are trying to encourage people by saying :" The fight is not finished! We are not looking for easy ways! It was only the first round, but the victory is ahead!". There were caring people that helped us to set up the camp, and helped with some food. Also there is a donation box. The money from it, under the public control, is being spent on the needs of the camp: tea, coffee, cigarettes, and so on. 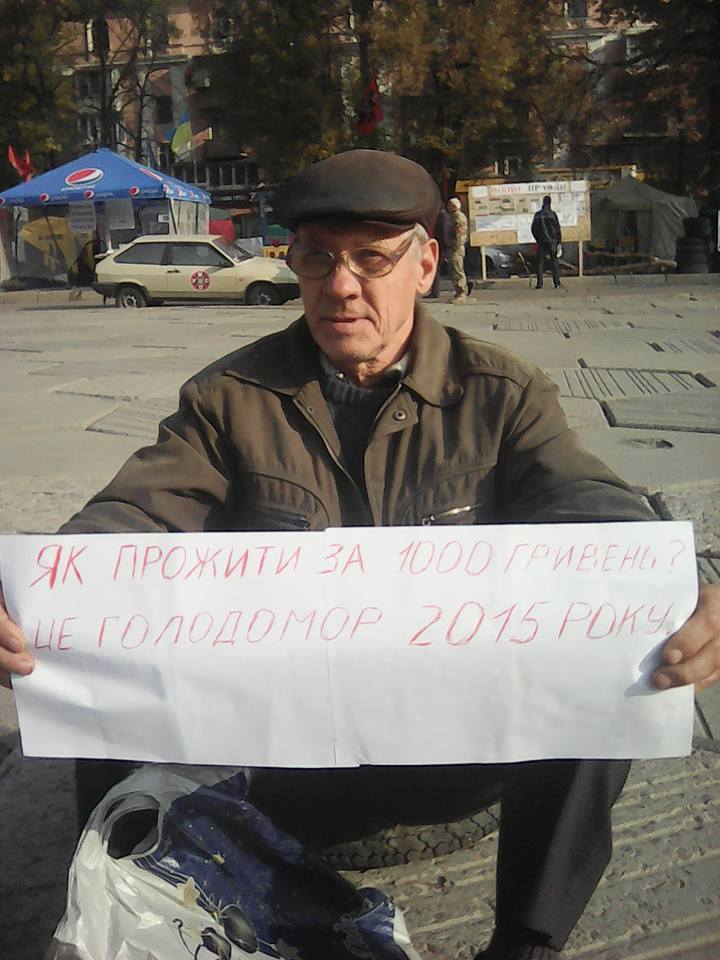 So what is the reaction to the action of the so-called government?

The Head of the regional administration Holovko V.A. has never even came up to us, but we have been passed his statements that we are "Sharikovy and Shvondery". As for the chairman of the regional council, he once came to ask us about our demands, but behind the scenes in his office he called us "marginalized people" and when the Agrarian Party wanted to put up their tent next to ours and to hold a children's concert, Vorona P.V. told them: "If you stand along with these tents, you will have problems in the elections!" Regarding the other powers ... there was no reaction on their part. But once in a while their clerks stop by and ask in compassion: "When do you finally cast these scoundrels?"

And how do the "law enforcement" agencies treat your “Maidan of Resistance”?

The "law enforcement" agencies treat our “Maidan of Resistance” with caution... Any initiative or manifestation of actions is accompanied by the funky interest. When we were mounting the wooden headquarters of the “Maidan of Resistance”, three police patrol crews drove over and started asking what we are building here? According to them these are small architectural forms and should have a permit for construction. But we answered them that we will report only to the authorities we consider as pro-Ukrainian.

We are in our country! And, as the great Kobzar wrote: "In my own house there is my truth, and my strength, and my will…” 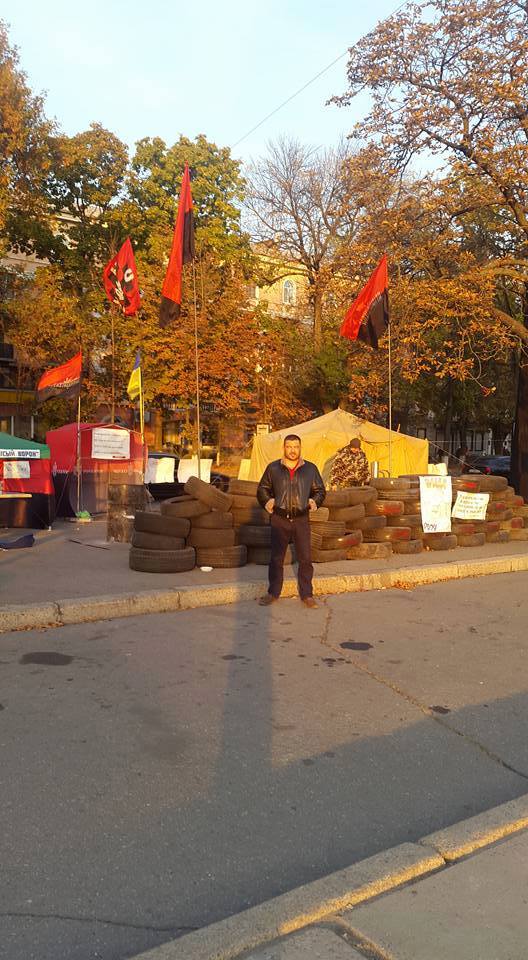