The way our lake is being stolen, or is there going to be Mukacheve-2 in Ternopil? 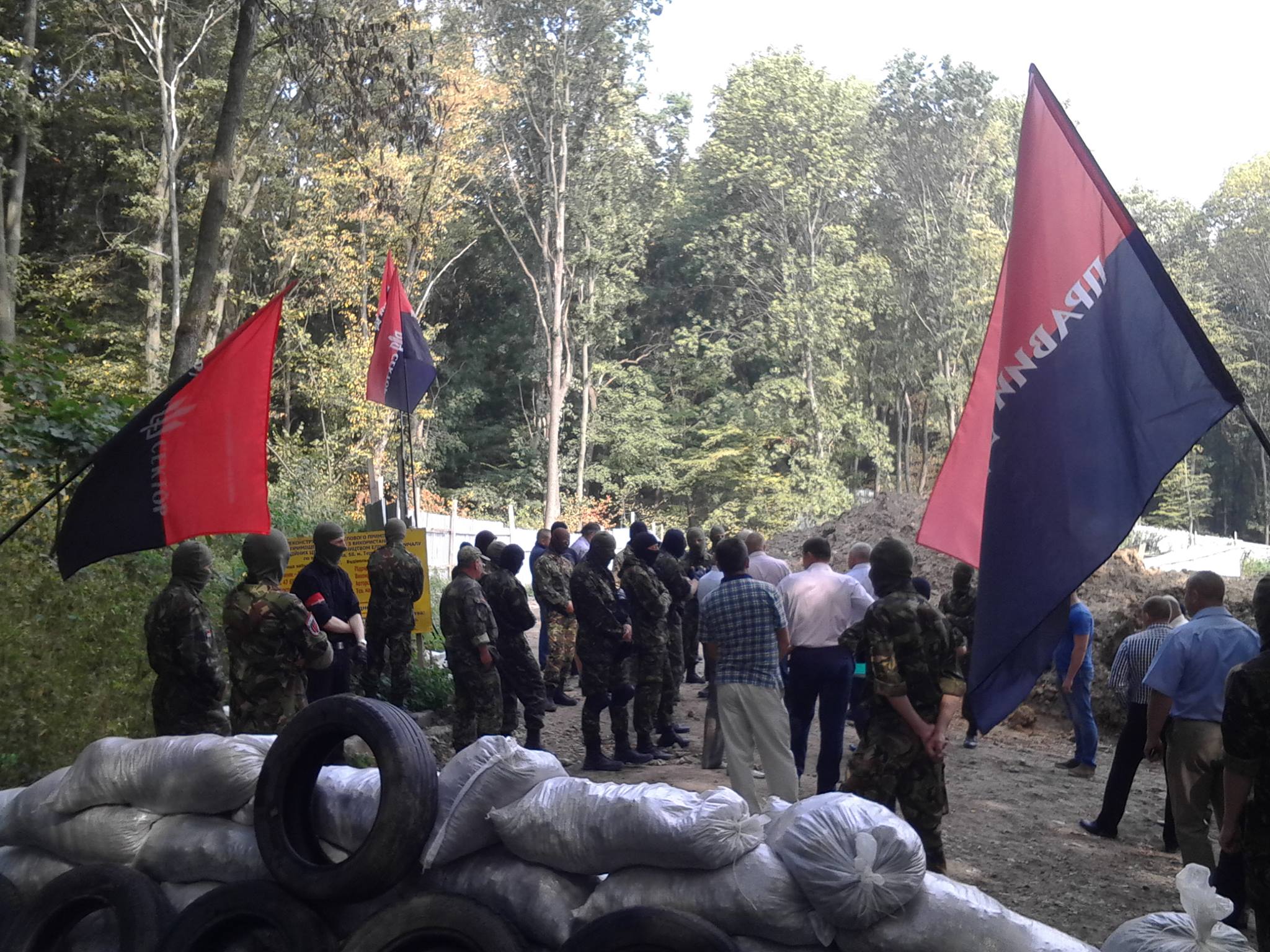 At the beginning of August the activists of “The Right Sector” of Tenopil region were drifting on the motor boats checking the Ternopil laкe for illegal nets. A sudden rain forces them to come to the nearest shore.

This is the beginning of the story.

Because the reaction of the government representatives was less than sufficient, The Right Sector” activists started their own investigation of the new construction along the shoreline of the Ternopil lake.

Investigation showed that the new developments are taking over the shoreline of the lake blocking public access to the water.

One of the most cynical examples is this sort of “reconstruction of the garage, as non-living space”. You can see the “garage” on this picture:

Could not load widget with the id 32.

Last year this construction already was under several criminal investigations, one of which even got to the court. The Ternopil court (the first instance) ruled to terminate the lease of the land between the citizen Huda (as the developer) and the state enterprise “The Ternopil Forestry”. The decision of the first instance was appealed and subsequently canceled by the Court of Appeal.

On November 11, 2014 the prosecutor's office filed a cassation appeal, and in two months, on January 19, 2015, the very same regional prosecutor’s office files the cassation disclamer. The cause of the suspicious behavior of the deputy prosecutor of Ternopil region Oleh Halytskyj is currently unknown. We hope it’s not corruption.

On August 14, 2015, “The Right Sector” of Ternopil region filed a complaint to the regional office of the Ministry of the Internal Affairs, as well as to the Regional Prosecutor’s Office and the Regional Government Administration about this illegal development. There came no answer.

Because of this, on August 27 we set up a symbolic “checkpoint” on the way to the construction area (the walking pass was available to everyone). Only this way we managed to draw attention to the problem. Soon enough there came representatives of the security agencies led by the Head of the Regional Security Office Oleksander Bohomol.

Along the security representatives for unknown reasons came the Deputy Prosecutor of the region Oleh Halytskyj (remember, the one who in January disclaimed the cassation appeal?). Here is the video from the place of the incident:

After the officials left, around 6 PM, there came the group of “titushky” led by the “criminal authority” and the developer Ihor Huda, altogether about 50 people. The main requirement of the newcomers was for us to leave the territory of the construction. The main argument: the construction was absolutely legal (we have no doubt in the possibility of obtaining bribed permission documents).The conversation with the “titushky” was very specific. Having predominance, they behaved quite arrogantly, though we managed to avoid a violent confrontation.

Despite the fact that these people praised the developer right and left (kept saying that “he is helping us”, that is paying for participating in the “clashes”), no one could confirm that the construction indeed is a garage.

It was strange to hear from the representatives of the criminal world accusations that “the Right Sector” of Ternopil region works for crooks. If the local community folks are criminals, then who are these people?

Beside this, the information obtained from the “titushky” that the construction company “Creator-Bud” is involved in building of the fortifications in the Eastern Ukraine, raised a big concern. How could one trust a company with a dubious reputation to use the budget funds? And overall, aren’t the budget funds being used to build this white stone garage with arches overlooking the lake? During the verbal dispute, one of the Mr. Huda’s men declared: “I’ll get the machine gun from the trunk and shoot you all, so you’ll have “Mukachevo-2”.”

Following this statement and the threats toward the activists of “The Right Sector” of Ternopil region, which are well supported, we consider it necessary to transfer the protest from the political to the power ambit. For the defense and safety of the protestors, there will be formed a special cover group, which, in the event of threats, will use all the necessary measures to preserve the life and health of our fellows! The group will act only if “titushky” dare to resort to force!

At the same time the activists of “The Right Sector” of Ternopil Region will keep demanding to fulfill their requirements:

The most curious readers can get acquainted with the project structure.

The Vacation house in the city of Ternopil - is a multilevel building located next to the Ternopil lake on a difficult terrain. The house includes a swimming pool with adjacent premises and a dock for pleasure boats. The peculiarity of the project is the large number of terraces, which emphasize the recreational function of the home. Designed in 2011.

Could not load widget with the id 37.