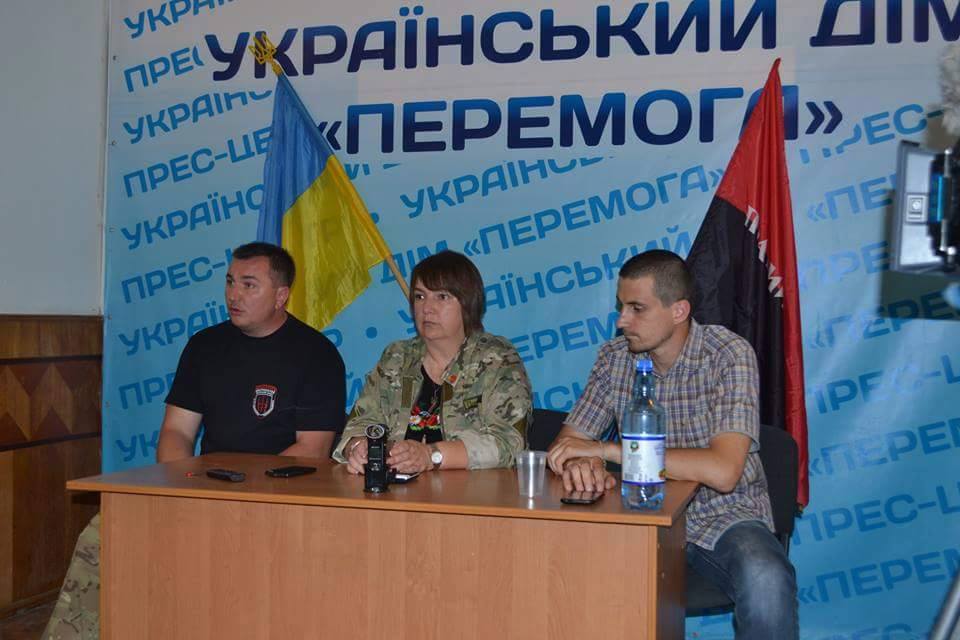 The press-conference of NLM “Right Sector”about events in Zakarpattya has taken place today, on 28th of July, in Ternopil. Head of “UVC-info” Alla Mehel, who came to our city on the way back from Mukachevo specifically for this event, a head of 6 RBAT UVC RS Friend “Buryachok” and the head of political wing of NLM “Right Sector” of Ternopil oblast (county) Vasil Labaichuk were answering the questions of journalists and all other volunteers. At the first place, Mrs. Alla shared an information about situation in Mukachevo, its causes and consequences.

So what exactly happened in Mukachevo? All-embracing answer was given and this question was closed once and for all. Soldiers of UVC RS from sabotage reconnaissance group (SRG) “Sonechko”, who came back from front during rotation, have stopped the movement of contraband through Ukrainian border. By this action they “stepped on the throat” of organised crime groups, which had a powerful protection of representatives of government, and were getting sufficient income for their crime activity from contraband on the border. At first, our fighters and their families were blackmailed and threatened via phone calls. On the eve of 11th of July well-known gangster with big crime history, and at the same time member of the “Verhovna Rada Ukrainy” (main government of Ukraine) Mykhaylo Lanyo proposed fighters to have a meeting. All the men from from SRG “Sonechko”, who took part in operation of stopping contraband, were of native origins and as a result they were concerned that if they didn’t come on meeting, they would show weakness, which would lead to physical elimination of them and their families. Guys made a decision to come to meeting and show the criminals, that they are not afraid of them and can strike back if situation requires it. Most of the guns, used in the fight with bandits, are legally registered, others were taken as a trophy from war. More than a 100 armoured men and forces of corrupted police departments of Ministry of Internal Affairs (MVS) and Security Service of Ukraine (SBU) were used to eliminate our fighters.

Information about the contraband in Zakarpattya was well-known before the situation had hapenned. Appeals with proof of contraband and its patronage by local authorities were sent repeatedly to SBU, however there was no response.

Volunteer soldiers and volunteer battalions are not profitable for the “system”, as they are the most efficient and disciplined in all Ukrainian army taking part in war, hence they can fight back the enemy. On the contrast oligarchs on top of the government need one-sided “ceasefire agreement” and this hybrid war, through which they can steal millions from national budget and which they can blame for all the problems and failing of ruling the country.

Zakarpattya is also famous for its separatist movement. You can take as an example Hungarian nationalistic right-radical party “Iobik”, which is well financed and widespread. There is also an information about some amount of hermitages, containing “monks in assault boots”, who are sponsored by Russian Federal Security Service (FSB) and came to Ukraine clearly not with good intentions. Politicians in Ukraine need conflict in Zakarpattya to remind Europe about themselves and to ask again for financial credit “to overcome the conflict”, which they can divide between themselves. East of Ukraine after year and a half of war have annoyed politicians, and it has stopped being an object of “milking” money from Europe. So now politicians try by all means to create another informative sensation for world mass media. The other thing is a conflict closer to Europe, on the border of Poland, Hungary, Slovakia. Zakarpattya is the most useful for this purpose. Everyone remembers how the conflict on Donbass started, with terrorists taking administration buildings and guns from policemen and SBU without any resistance. It doesn’t make any sense, why 5000 soldiers of National Guard and MVS forces with appropriate amount of armour and ammunition were sent on Zakarpattya to catch just 10 fighters of Right Sector.

Shamefully, at present moment we can’t win informational war, as oligarchs in government use all of their power in terms of “pocket” tv channels, newspapers and other types of mass media to discredit volunteer movement.

You will be able to watch the full version of press-conference soon on informational resources of NLM “Right Sector”.