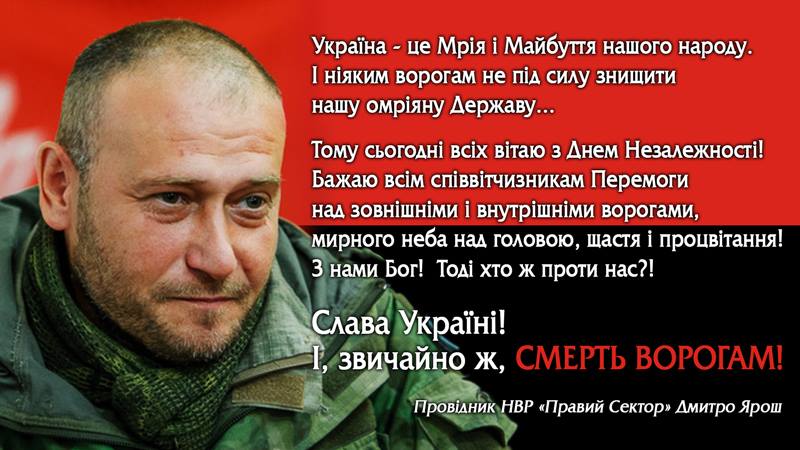 I fought for it since 1988. I raised the first blue-yellow flag in Dniprodzerzhyns'k in April 1989, created the Rukh and the Ukrainian Helsinki Union...

Since 1991, I have never celebrated this date, because Ukraine was a neo-colony, and there was very little to be proud of.

After Maidan during the war, I realized that Ukraine still is a state, and Ukrainians are the owners of their destiny in their state. Despite the temporary parasitic power...

Because Ukraine is not the President, not the Parliament, not the Cabinet of Ministers, not power’s huckster, who at the 'crowded crossroads' are selling national interests, not corrupt policemen, prosecutors and judges...

Ukraine is the ones who put the life, liberty, health, strength, energy and wealth upon the altar of the struggle for future of the Nation and State.

Ukraine is the Dream and Future of our people.

And no enemy could not be allowed to destroy our desirable state...

So today, Happy Independence Day to all!

I wish victory over external and internal enemies, the peaceful sky over your head, happiness and prosperity!

God is with us! Who is against us then?
Glory to Ukraine!
And, of course, Death to enemies!"
Dmytro Yarosh, the Leader of NLM "The Right Sector"