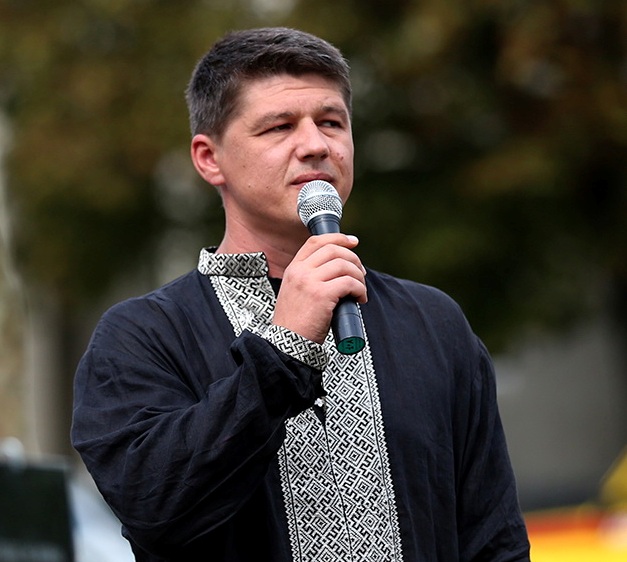 There is frathernal march in the streets of Ternopol. Soldiers of the UVC Right Sector, the activists of Trident, the activists of local self-defense of Maidan and AvtoMaidan, fighters, who defended the integrity of Ukraine in the area of anti-terrorist operation, and non- indifferent citizens took part in this procession.

The procession started on the Theatre square with performance of the Anthem of Ukraine, then the participants of the action moved to the Museum of Repressed, where there was a solemn prayer, later flowers were laid at the Stepan Bandera and Taras Shevchenko monuments. Near memorial sign, wich was installed yesterday, activists honor the memory of the Heroes of the “Heavenly Hundred” and fighters, who died in the war with the Russian-terrorist invaders.

Andrei «Bogema» Sharaskin : « We continue to exist in the mode of internal occupation, and almost all the governanсe system is build on the blood of our fellow soldiers. It`s a proven fact. So far, war is not called a war in our country. Thats why we could not honor as it should be, our fellow fighters from Ukrainian Volunteer Corps and fellow fighters from other battalions. We have no right not to work on the bugs. We told to candidates last year before the elections : « Remember, when peple come back from the front, they will ask you!» Now people come back and ask questions as they can, somethimes with arms in their hands! And now those people are called terrorists and traitors. We will continue our struggle! Many of representatives of public organizations, who are present here now, refused to participate in the next local elections. I appeal to you and remind you that nobody canceled the direct democracy. People always was the only source of power in Ukraine, it is now so, and it must be so in future. Somebody, who says, that you could not organize a march, or proсession, or you could not honor your heroes, and he even ready to set conсrete blocks for this, he just forget about peoples right to direct democracy, which we are going to provide . We have no right to forget about Heroes of the “Heavenly Hundred”, also about those who died in the war!»

It should be noted, neither pro-government structure does not support the procession in Ternopol. Moreover, public utilities have set conсrete blocks in the town near the Square of Heroes of Maidan a few days before the procession.