"Our victory is in the hands of God, but our heroism is in our hands" 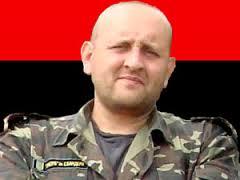 St. Mary's Day, above all, is the day of warriors. People asked the Virgin for protection at all times. Today is a good tradition to pray to the Heavenly Mediatrix to protect all those who are on the road, in a war, or in captivity.

In this magnificent holiday I congratulate all Christians - men and commanders of the Ukrainian Volunteer Corps! Let each combat unit and reserve battalion will be under the protection of the Virgin Mary!

Our struggle is not finished yet. Each fighter of the UVC, no matter whether in the war or in the rear, has a sacred duty to win.

By taking up arms, we chose the fate of soldiers. Ukrainian Volunteer Corps is a real people's army. And we will fight for the fate of the Ukrainian people until the final Victory.

Russian invader tramples our land. And there is no "truce" for us while the enemy is alive. There should be no pity for those who brought death and destruction into our home. No forgiveness to the traitors who went against the Ukrainian people. Our goal is the complete and final liberation of Ukraine from the eastern horde of nowadays.

At a time when the nation has to fight the external aggression, the internal enemy is tearing up our country by sweet swaying the Ukrainians, putting to sleep the Cossack’s eternal spirit, destroying patriots, putting volunteers in prison, bringing Ukrainians to poverty, while at the same time relishing its impunity. We must keep up the front line here too. We must mobilize and unite the Ukrainians and repel all flimsy "commanders" and their poppies, as well as political prostitutes and economic parasites that get enriched on our blood.

And so it be, because God helps those who stand for Truth!

It is easy for those who have weapons in their hands and faith in their hearts. It is much harder for our fellow prisoners - the newest political prisoners. Remember, friends: you are in captivity, but the "Chief" and its lackeys do not last forever, and all of your work in the name of Ukraine will be written in golden letters to our history. We will triumph one day for sure!

Let the Mother of God protects our imprisoned soldiers of the 1st Reserve Battalion of UVC from Transcarpathia: Volodymyr Burcha ("Scrooge"), Rodion Horbenko ("Radik"), Serhij Deyak ("Tsyupa"), Roman Munchak ("Munya"), and hundreds of imprisoned volunteers who were put behind bars by the current regime.

During this holiday let’s also remember all the soldiers who passed away, losing their lives in the fight against the enemy.

The unity in hearts, one common idea, and impulse to fight are the keys for the Ukrainian Victory! Glory to Ukraine!