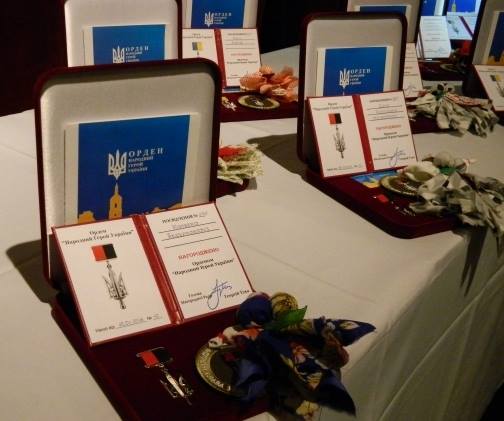 The 12th ceremony of awarding with the Order of People's Hero of Ukraine was held in Ternopil. The Ukrainians were taking participation over a month in open discussion of candidates, among them there were the military men, journalists, fighters, medical doctors, volunteers, and priests. Thirteen people received the awards. Four of them are from the Ternopil Region: Valerii Chobotar ("Hatylo"), Chaplain Rev. Hunia, and posthumously to Andrii Yurkevych ("Hrizli") and Ivan Vityshyn.

The Order of People's Hero of Ukraine is the Ukrainian nongovernment award, being introduced in 2015 by the initiative of Andrii Boiechko, a collector and volunteer, and Dmytro Shcherbakov, a jeweler. Today more than a hundred of fighters and volunteers were awarded with the Order "People's Hero of Ukraine", among them there are the distinguished volunteers as Dmytro Yarosh, Yana Zinkevych, and Valerii Krasnian.

The ceremony took place on Friday, January 15, in the premises of the Ternopil Academic Drama Theatre named after T. Shevchenko. Such well-known people to Ukraine as Andrii Sharaskin ("Bohema"), Heorhii Tuka, Valerii Chobotar ("Hatylo"), Serhii Prytula, Volodymyr Holodniak, and Serhii Ilnytskyi ("Sokil"), were present at the ceremony. For the first time Dmytro Yarosh attended the ceremony, in his speech he said:

"It so happened that I was one of the first to be awarded, and I can honestly say that it is much more pleasant to be the People's Hero of Ukraine then the People's Deputy. When the war began, we defended the roadblocks at Sloviansk, also we liberated Krasnoarmiisk, Piesky, and Avdiievka, and fought at Savur-Mohyla, we didn't certainly think about the awards. In general we thought that the war would be finished quickly, when we took over Stepanivka and almost came to the border with Russia. Only it didn't happen due to the objective and subjective reasons. I understand perfectly well that the government awards system is absolutely discredited in the eyes of our society, because we know how many are officially the Heroes of Ukraine, who have been receiving them before the Revolution of Dignity, and how many of them were and are the traitors. Unfortunately, they are officially considered to be the Heroes of Ukraine. And, perhaps, the society was to create its national award. Naturally, the volunteers, who were also involved in stopping the aggressor, have initiated the creation of such award. I believe that nobody will be unjustly rewarded; I am confident that a high title of the People's Hero of Ukraine will be carried by people who truly deserve it. I know very well that my award is not just a distinction of Dmytro Yarosh, it is the reward to all men, who being the members of volunteers' battalions, gave their lives defending the state, and also it is one to all those guys, who being armed together with me, protected the territorial integrity of our country. Glory to all those Heroes, who died fighting, and all others, who have fought and are fighting, and, unfortunately, will continue fighting for freedom and independence of our country."

Andrii Boiechko, the initiator of creating the Order, journalist, and volunteer, said in his speech to the audience:
"If the people have a right to feed, dress, and cure the army, then it has the right to reward because all of our awards department at the Presidential Administration ran away from the country during Maidan; at the end of 2013 and in the beginning of 2014 it became clear that there would be no any state distinction. Moreover, the old awards couldn't be given to the new Heroes. So in February 2014 we began to make the decorations and present them to those who deserved it. We hoped that the government would introduce the new awards and differently reward people but this didn't happen. Therefore in October 2014 we decided that it is necessary to make the medals which differentiate the generals, who wear "iconostasis", from those people who actually take part in combat."

Dmytro Shcherbakov, a jeweler from the Kyiv City, is making the Orders "People's Hero of Ukraine". All medals are produced of silver that was donated by the Ukrainians for this purpose. Twelve other countries of the world, that also send silver to Ukraine, have joined this initiative. Any Ukrainian can submit a candidacy of person, whom oneself considers the hero and knows about the valorous deeds, to the Awards Council that is headed by Heorhii Tuka, volunteer and governor of the Luhansk Region. A committee of 12 people, which consists of soldiers, volunteers, and doctors, choses the nominees to be awarded.

6. Ihor Volynets "Yenot"
Driver of the 2nd Battalion of the 95th Brigade

13. Ivan Vityshyn (posthumously)
Served in the Special Forces in Crimea. Wounded tentatively on January 19, 2015, at the new terminal of the Donetsk Airport. Died on January 20th (on the night of 21st).

19. "Come Back Alive"
The Charitable Organization founded by Vitalii Deineha.