We, the followers of Bandera, we are coming! 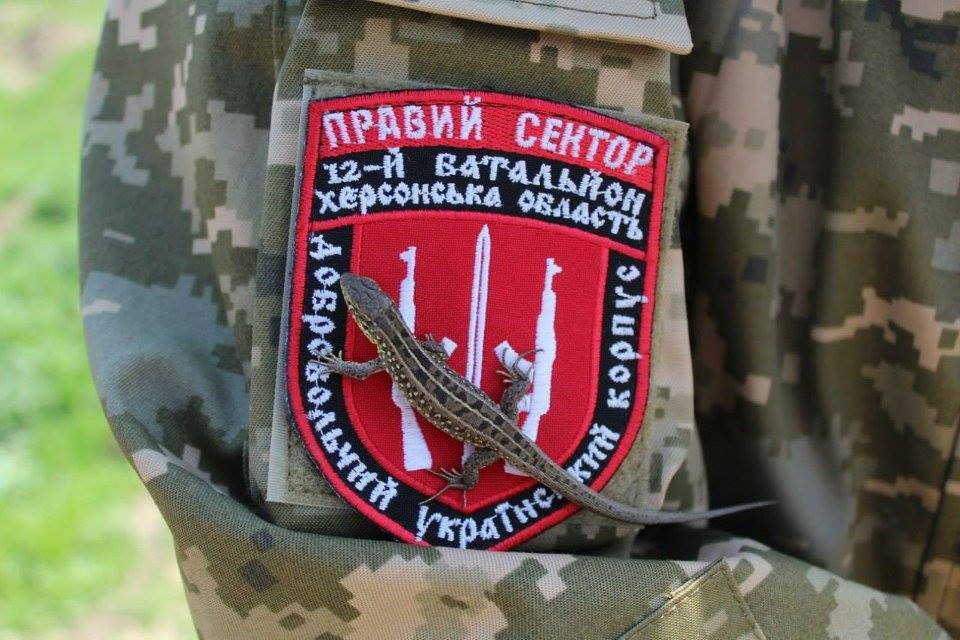 Leads us to the battle the fallen fighters’ glory,
For us, the highest in the law and order
Is the United Sovereign Ukrainian State,
From San to Caucasus, free and strong!
The march of Ukrainian Nationalists.

It is being said that during the several hundred years of national liberation struggle the Ukrainian nation lost the best, the most intelligent, the most conscious people. Others, with rabbit souls, have adapted, bent. Isn’t it the reason why we are now lacking real Cossacks, because we are the descendants of those "swineherds and peasants" that had survived with lowered head.

I want to agree with the above statement when during the war in Donbass, in peaceful areas I meet robust men of military age not in the military, but in bars and clubs, in expensive cars. Yes, in part it’s the fault of our unter-state, not able to take advantage of the explosion of patriotic feelings for the mobilization and victory. However, not only youth in bikini on the beaches of the Black Sea is trying to ignore the war, but many of us, not mobilized/still passing the medical examination (maybe it will blow over?), do it here and today.

Nevertheless, the Ukrainian ancestry didn’t interrupt despite the barrage of wars and repressions, manifesting itself through generations and generations in worthy souls. They fumigated walls of Istanbul, the capital of the most powerful empire in the world, with musket smoke. Every spring they came out on their handmade canoe (“Seagull”) to jerk the turks and to liberate their brothers from the slavery. Near Konotop they counted up the moscowits’ ribs with spears so that even the tsar was about to flee from Moscow. From this cohort came the brave rebels and haidamaks of the “Kholodny Yar”. They were waking up our sleeping liberty by singing with kobza accompaniment. Despite the ban of anything Ukrainian, they secretly read the poetry of Taras Shevchenko. With the first shots of World War I, in 1914, these dignitaries created the divisions of Sichovi Striltsi, died near the village of Kruty, and dashed in the Makhno wagons with devil’s breathing through the steppes fighting the whites and the reds, and the other Antanta invaders. But there was not enough power. The flame of liberty was extinguished under the Bolshevik heel. But they didn’t lower their heads and created UVO-OUN. It is exactly about them - "Executed Renaissance" in the Soviet Ukraine.They were winning in the World II under "Hurrah!" as well as under the slogan "Glory to Ukraine!" They have created the Ukrainian Insurgent Army (UPA) – the army of undefeated, the army without a state, the only one that did not surrender even after the war, whose last “Kryjivka” (shelter) heroically died in April of 1960.

Indeed, the Cossacks’ kin will never end. And we, their grandchildren and great-grandchildren, with cobblestones from the Khreshchatyk street, dared regime of the pResident Yanukovych, formed the first volunteer battalions from the Maidan people, left laying along the plowed by the "Grad" Ukraine-Russia border, dying, but keeping the corridor for the fellows from Debaltseve, turned into cyborgs in the Donetsk airport - others would not survive that!

Donbas Liberation War continues. Despite the reluctance of the state bureaucratic counterrevolution, capitulation of the new/old government to the Russian colossus on the clay feet and to the Western purse, we are not only holding back - we are going forward. We will win - we are destined to defeat. Meanwhile, we are losing the best ones, whose blood generously irrigates fields of our Fatherland, and their souls will serve the Lord forever.

Those who come after us, paying attention to our deeds and graves, will say: "They fell for God, Ukraine, and Freedom ..." And there will be historical studies of tumultuous 2014 and 2015 God’s years, and even obelisks, songs, and legends. All of this will happen. But in the future. Without those of us who’ll fall in a combat.

And today we, the nationalists, like our glorious predecessors from OUN and UPA, are in a deadly battle with the Russian invaders. And while not everyone is able to express themselves aptly, we say it simple - who but I? We do not always have time to hug our children, let alone to answer questions of our unborn grandchildren: for what?

For that isolated sunflower on the edge of the field.

For children laughing on a swing near the entrance.

For work-weary hands of the mothers wiping away tears after us.

For the dead and the living, and the unborn sons and daughters of yours, Ukraine, - for this we will be dying by the will of our Lord and the revolutionary Leaders.

But it’s too soon for our enemies to rejoice, for we are yet alive. And while we have strengths, we will be destroying them ruthlessly. You, the Russian World, do you hear our steps? You, the dirty current unter-government, do you feel the glare of fires? You, the flock of Ukrainian haters, do you feel our angry breath in the back?

We, the followers of Bandera, we are coming!