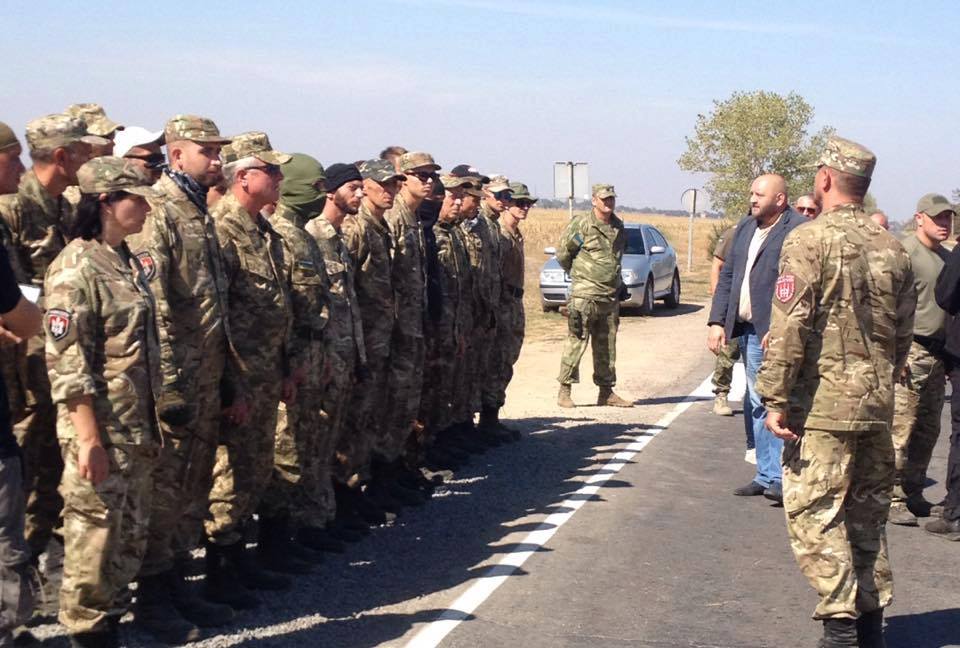 Today, September 20 at 12:00, blockade of the border with occupied Crimea has begun. The activists of the Mejlis of Crimean Tatars and Ukrainian nationalists of "The Right Sector" have blocked the road in the village Chongar, Kherson region. Light motor vehicles can pass; trucks are stuck. There have been painted several pedestrian crossings, which are used by people blocking traffic. In short, the action looks nice and within the current legislation of Ukraine.

Now about 100 activists of the "Right Sector" take part in the border blockade. They have already stopped the first truck with Donetsk numbers.

Simultaneously, establishing of roadblocks has been launched in Chongar and other towns on the border with Crimea. The fellow fighter "Tartar", the commander of UVC battalion, handles the roadblocks and "practical part" of the action. He knows the best Crimean Tatar realities.

As we have said, representatives of internal occupation regime established and maintain economic cooperation with the country-aggressor, the Russian Empire. Our task is to block completely this treacherous scheme of criminal power and break any ties with the outside enemy.

First steps are done. This is just the beginning.

Attention All Branches and Divisions of the Right Sector 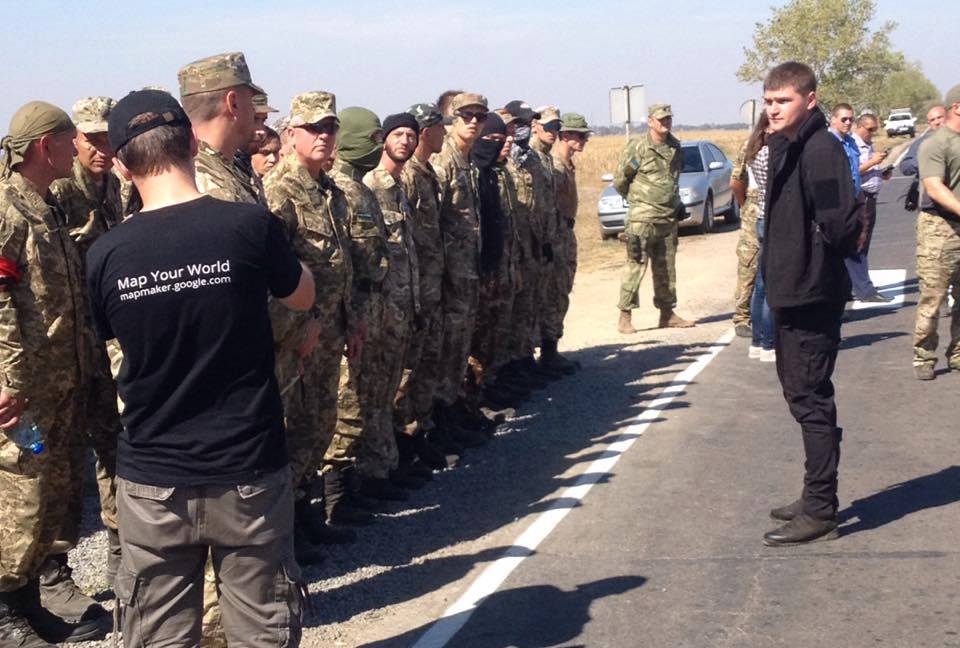 It is allowed to join the blockade of Crimea only in agreement with the leadership of the regional organizations of the Right Sector or the commanders of the Ukrainian Volunteer Corps units.

The operational command unit of the Right Sector is positioned on the territory of the conducted action. Friend "Khorvat" has been assigned as the chief of staff of the unit. Friend "Letun" is responsible for the general coordination of all RS and UVC units.

The commander of the 8th Separate Battalion of the Ukrainian Volunteer Corps "Right Sector""Aratta" tells about the present of the battalion and plans for the future. 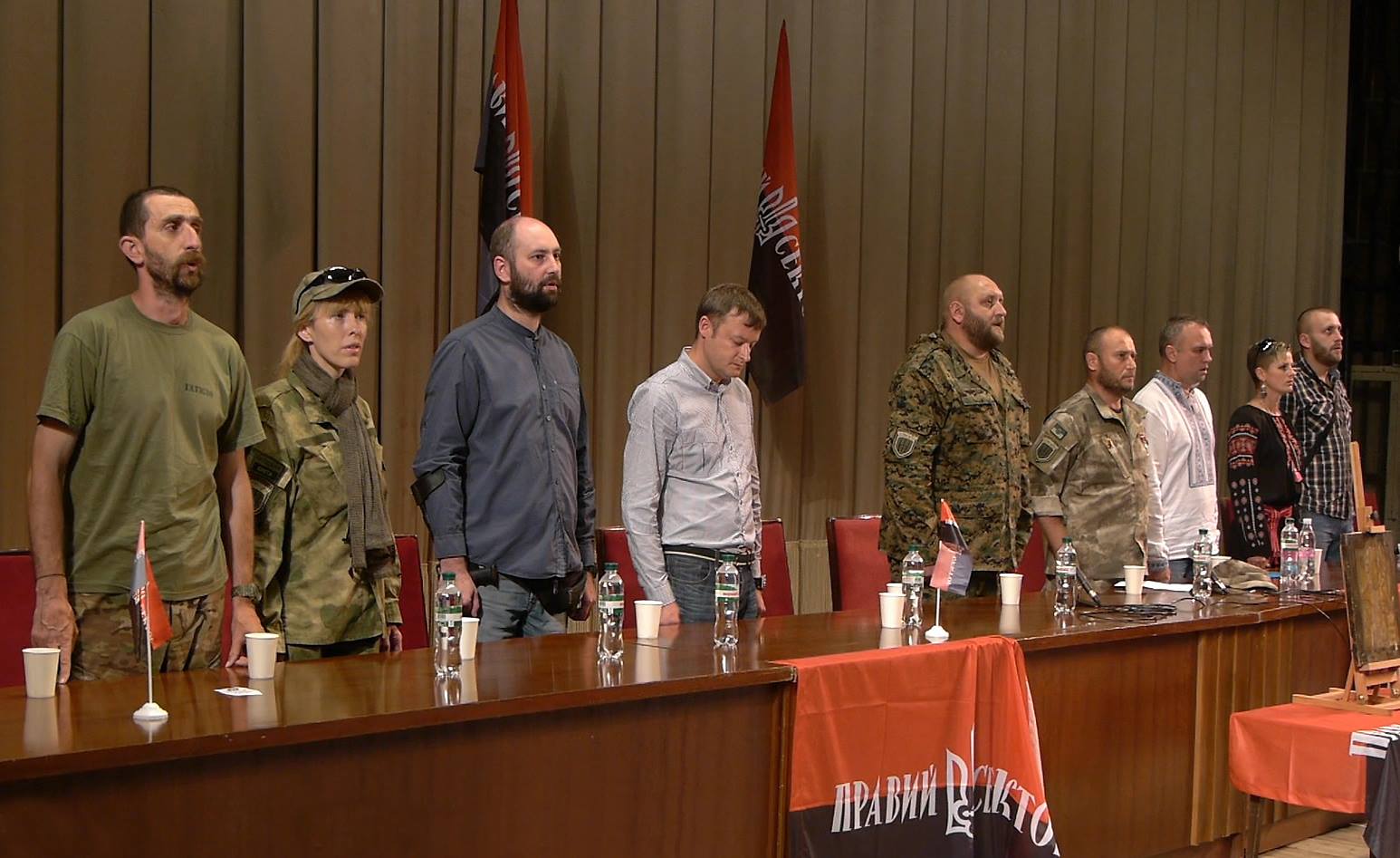 Brothers, we agree with you that the National Liberation Movement "The Right Sector" and Ukraine as a whole are currently going through the difficult times and it is largely the fault of the highest state leadership.

Like you, we want radical actions, but to win, in addition to yours and our readiness, there is a need for willingness of the active part of the society plus an appropriate situation in the country, and it does not occur immediately - neither from bright appeals, nor from sacrificial acts. The secret of victory is in the long work at the beginning and then in a correctly chosen moment. Many of you have proven that you are willing to die for our goal, the Ukrainian Independent State. Now prove that you are able to work hard for it.

The National Liberation Movement "Right Sector" has joined the blockade of Crimea, initiated by the Majlis of the Crimean Tatars.

The Crimea’s blockade is regarded as a double blow - a direct blow to Moscow's interests and to the current system, which has developed in Ukraine, a system of corruption and surrender of national interests.

Unfortunately, we have to state that the internal occupation regime headed by Poroshenko currently continues to enjoy success in implementing their plans, which have nothing to do with our national interests. Under these conditions until patriotic forces will not take enough weight to reach the strategic level, we will increase its activity in the tactical area.

The Crimea’s blockade will be directed to the achievement of tactical victories, including ensuring the requirements of the Majlis. At the same time, we clearly understand that the liberation of Crimea, as well as the release of the occupied territories of Donbass, is impossible without an armed struggle against the occupiers. But such a struggle can be conducted only by fully implementing the strategic goal - the overthrow of the regime of internal occupation and the attainment of full statehood.

Leaders of the National Liberation Movement The Right Sector

Ukraine on fire - life on the front line.

The Leader Had Surgery 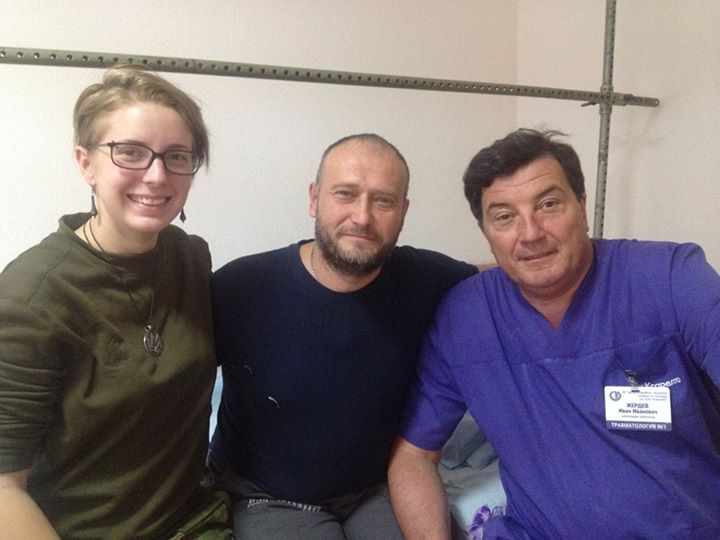 As Yuri Skrebets said, “The Leader’s surgery was completed.

Dmytro Yarosh was admitted to the Mechnikov Hospital in Dnipropetrovsk because of pain in his wounded arm.

The Leader was wounded by shrapnel from a GRAD, when a shell hit the car near the village of Pisky in Donetsk Region.

Over the last month, there have been many controversial events both at the front and in the state. That is all reflected on the activities of the Corps and the internal state of the soldiers and commanders. At present, the situation in the country is quite different from the situation that was last year. Therefore, we cannot stand still.

Currently, we are working on the optimal structure of UVC that should meet the tasks entrusted to the Corps. There will be a reorganization of the Corps Headquarter and units headquarters.

The priority tasks of all structures: the combat activities, a training of fighters (military and ideological), elaboration of the system of protection during repressions, coordination with other volunteer units in rear to protect the interests of fighters, systematic assistance to the wounded and families of the victims, providing material and technical resources to all our units. This is in general. Without details.

We all have created UVC without any government assistance. UVC is a people’s organisation and therefore UVC serves to Ukrainian people. No other option. Does not matter what east or west wants.

We could be criticised for joining or not joining the Armed Forces or Security Service, but we go further. The road will be handled by the walker. We cannot be everything to everybody and entirely satisfy opposite groups of interests in society. We are such that you accepted us in spring last year. And if someone wants to criticise or blame us, let he/she first passes our way. But we are open to suggestions and professional advice.

There is politics, and there is the duty to protect our land from bastards. Let everybody makes its things and then we will win all together!

Commanders and fighters get detailed elaboration soon. We do not welcome panic and "everything-is-lost".

Glory to Ukraine! Glory to fighters-volunteers!

Another court trial of the Ukrainian patriots

Yesterday there was another court trial of the Ukrainian patriots. This time the regime jailed the former member of the Tryzub organization and now a member of the Svoboda political party Yuri Syrotyuk. The goverment started a harsh battle against the nationalists.

Despite some differences, it is absolutely necessary to overcome the division of the nationalist movement. This is the only way to stop repressions and once more become a driving force for Freedom, Justice, and the Well-Being of Ukrainians.

Freedom to Yuri Syrotyuk and to all other Ukrainian Patriots who have been jailed by the regime!

Dmytro Yarosh on course of events in Odesa

Money for collaterals for guys from Odessa has found. Transferred. Soon Sergiy Sternenko and Ruslan Demchuk will be free. I know that the president and representatives of the Ministry of Internal Affairs has shown their good will.

But it does not eliminate systemic issues, such as restoration of the before-Maidan orders and revenge of vilkuls, kivalovs, boykos; mass repression and persecution of patriots; unpunished partners of Yanukovych; prosecution of police arbitrariness; lack of real reform; poverty; State’s tearing by oligarchic groups; Kuchma-Medvedchuk’s rigged matches with Putin and others.

If the government does not soon solve these problems, the big shocks again expect Ukraine.

P.S. Protests in Odessa are not canceled. Readiness is kept.